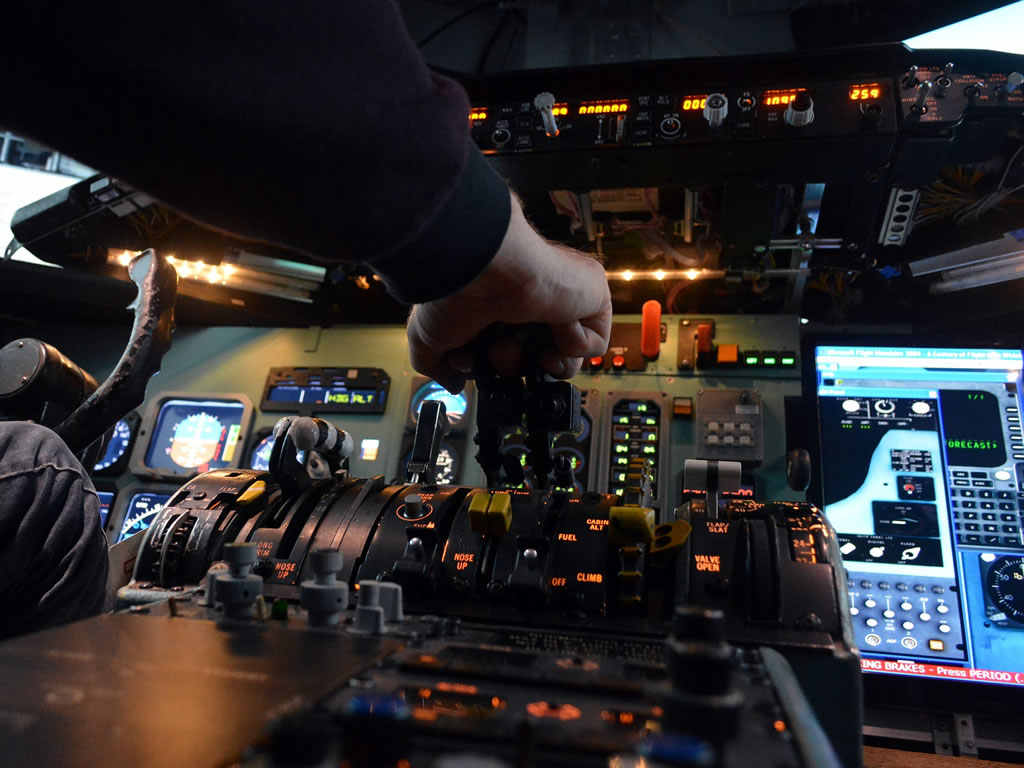 Fly into the virtual blue with this passenger jet flight simulator experience and learn how to ‘fly’ an airliner. Yes, really.

Step into the cockpit of a real training simulator and experience the thrill of becoming captain and commander in the likes of a Boeing 737. Learn from the best in the business as you taxi, take-off and control the craft in the ‘air’ before returning to terra firma; but will you make the perfect landing, or will it be nose-dives all the way? Whatever your success rate, this is an enlightening experience that’s electrifyingly real and full of fun.

Normally available as 15-, 30-, 60- and 90-minute sessions, these flight simulators are as close to flying a passenger jet as most of us will ever get. Taking place in a realistically designed simulator such as a Boeing 727 or 737 simulator or even an Airbus A319/A320/A321 simulator – many of which are used for real pilot training – you’ll learn all the crucial controls required and understand the basics of flying a huge passenger jet.

On the day you’ll meet your flight instructor before sitting down over a welcome drink to plan your preferred route and discuss the flight simulator experience. Then it’s time to get strapped into the cockpit, ready for take-off. First things first: you’ll start by running through all the pre-flight checks with the help of your instructor. Then you’ll start the ‘engines’ and taxi onto the runway, where you’ll use the controls to increase speed and prepare for take-off. Experience the stunning visuals and real-life sounds of the engines as you ‘fly’ the virtual jet to your chosen airport. Then you’ll touch down onto the runway, taxi back to the gates and shut down the engines.

What makes these simulators different to your computer software? The setting. Many simulators either faithfully recreate the cockpits of aircraft, and some even use former aircraft fuselage to add that extra dimension of realism. Stepping into a simulator is one thing, but stepping inside a real cockpit that once soared the skies is another level.

Step into this fixed-base Boeing 737 simulator for a 30-minute flight taking off and landing at one of the worlds craziest airports in the Caribbean.
From £89 per person from Into The Blue (at time of writing)Learn more°

Ever wanted to say those immortal words: “This is your captain speaking”? Now’s your chance. Prepare to earn your stripes as you discover how to command the cockpit of a virtual jet, encapsulated in a full-motion pod. With the help of qualified pilots, life-like imagery, movement, and real aircraft sounds you’ll perform a take-off, ‘fly’ to your destination and land on the runway.

It’s certainly not your average day out, and just think – next time you jet off on your jollies you can smile with smug satisfaction, knowing what’s going on behind closed doors. It’s a unique and thrilling experience that’s perfect for plane-spotters and aviation nuts everywhere.

The full-motion option takes this experience to the next level. Blocking out all external sights and sounds, you'll feel like you are in a real cockpit responsible for hundreds of real passengers on their way to Benidorm or Ibiza. Feel the simulator tilt up and down and side-to-side as you take-off and land this tin can like a pro. Don't expect it to forgive a heavy landing though!

Try this 60 Minute Full-Motion Simulator Flight in Leamington Spa, Coventry. Choose to fly either a Boeing 737 or an Airbus A320 and receive expert training from an ex-commercial airline pilot from the likes of BA, Virgin, EasyJet, Ryanair, or another of the big boys.
From £235 per person from Red Letter Days (at time of writing)Learn more°

Whether you fancy yourself as Maverick or Iceman, the Fighter Jet Flight Simulator Experience is a full-on Top Gun thrill complete with anti G-pants, ejector seats and jet fighter controls. Thanks to incredible simulator technology you won’t have to stray into the danger zone, but you’ll be in the cockpit of a real jet fighter finding out first-hand how to take off, fly, land and – if your breakfast allows – carry out barrel roll stunts and nose dives. Unless you’re an RAF pilot this thrilling experience is probably the closest you’ll ever get to a real jet fighter, let alone learn how to fly one. Just one question remains: will you be the best of the best? 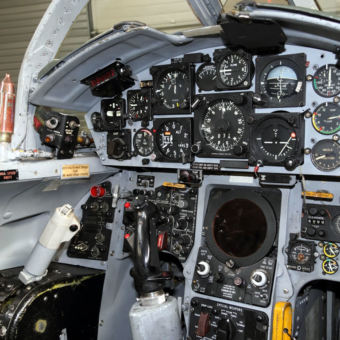 Master the controls of a fighter jet and perfect your military skills in a flight simulator.

On the day you’ll be met by your instructor who will give you a pre-flight briefing before kitting you out in a full flight suit complete with anti-G pants, helmet and gas mask. The simulator is the cockpit of a real jet fighter and you’ll be strapped into the ejector seat with your instructor sitting in the co-pilot’s seat behind you, who will communicate with you and provide instructions via your helmet’s intercom throughout.

During the Fighter Jet Flight Simulator Experience you’ll hear the roar of the ‘engines’ as you start the plane and will learn how to taxi down the runway before experiencing the challenges of take-off and flying in real-time weather conditions. The monitor displays real photo footage which enables you to follow roads, rivers and coastlines throughout your flight and to navigate over familiar towns and cities using the cockpit controls. At the end of your flight you will land the plane at the virtual airport of your choice with the help of your instructor, who is on-hand to offer advice and guidance throughout.

Flying a jet fighter is no mean feat – which is why the vast majority of the population don’t do it. It’s gritty, technical and unpredictable – and it’s also the adrenalin-pumping adventure of a lifetime. So if you want to try something that’s poles apart from your average day out, step into a fighter pilot’s boots and get up close and personal with this air-to-air combat classic. You’ll learn all there is to know about handling the beast from the pros of the sky, before taking on a virtual flight that’s electrifyingly real. Ready for take-off?

Enjoy a 30-minute Fighter Pilot Flight Simulator Experience in Stalybridge, Cheshire. Experience the challenges of flying a real fighter jet aeroplane but remaining on terra firma
From £39 per person from Buyagift (at time of writing)Learn more°

This is your captain speaking... - What You Need To Know

I arrived at an unassuming hanger somewhere in Surrey. Inside, it looked like any other office building. After a bit of paperwork and security checks, I was led towards the shell of a Boeing 737.

I was here to become a pilot, albeit for 30 minutes, and the location I had chosen had set up a flight simulator inside the fuselage of a retired passenger jet. Traces of its former life could still be seen as I entered through the aircraft door.

My first and only chance of turning left led me not to the first class cabin but instead to the flight deck. A bewildering array of switches, dials, and components formed the controls of this mighty beast.

My instructor, a pilot so good he now teaches others how to safely fly aircraft, showed me the ropes. He ran though what everything did while I looked blank. I absorbed enough to wing it (pun intended). 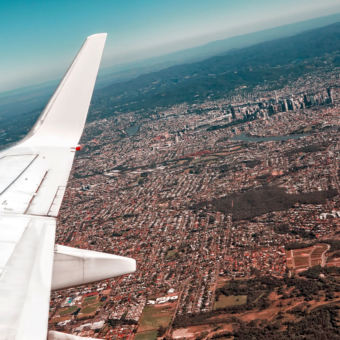 While my virtual passengers were sipping on their complimentary tea and coffee, I was hard at work trying not to crash

30 minutes isn't a great deal of time, but even so, my instructor was keen to get me to take-off and land the thing. Despite me forgetting all the instructions back in the 'terminal', I safely managed to get airborne. At one point, I forgot I wasn't actually soaring through the open skies. The real aircraft shell is enough to fool you into believing that maybe, just maybe, you are actually in the air.

Landing the beast was tricky as crosswinds pushed me off the centre line a couple of times. My virtual passengers may have adopted the brace position but I was as cool as a cucumber. I landed safely and managed to rescue the aircraft from veering manically into the grass.

Apparently I am a born natural (cue imminent career change) so my instructor took me to one of the most legendary airports in history. Kai Tak Airport, Hong Kong's international airport between 1925 and 1998, was notoriously dangerous, with skyscrapers and mountains to content with on the approach, and Victoria Harbour at the end of the runway. I left him dumbfounded as I safely touched-down with so much ease (really, I should be a pilot). We had some time remaining so I led the aircraft the the stand at the airport.

The full-on hands-on experience includes a lot of information and very little time to get used to the controls, but don't let that phase you. If you're even remotely curious about how easy it is to fly a jet, book this experience.

Red Letter Days stocks a variety of flight simulator experiences from static-base options to immersive full-motion sims. Locations are available across the country.
From £50 per person (at time of writing)Learn more°

Disclosure: I won a passenger jet flight simulator experience in a Red Letter Days competition. My opinions are my own.