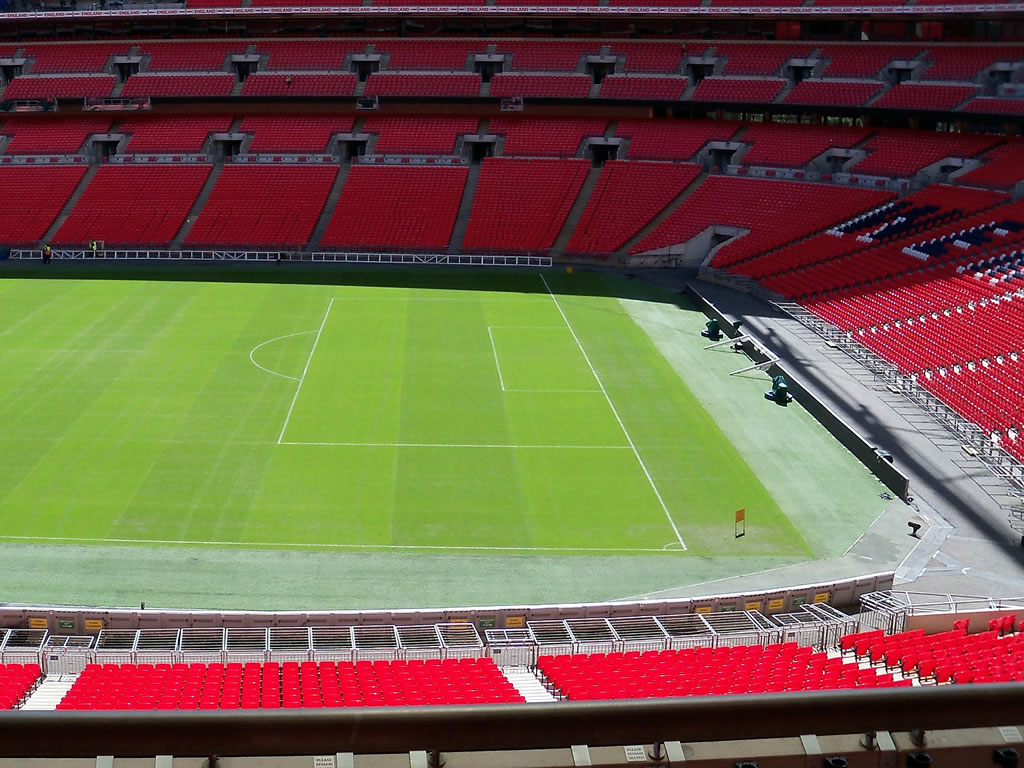 Listen up sports fans – this one’s for you. Fancy following in the footsteps of footballing greats? Stepping out onto Centre Court? Or trotting through the players’ tunnel at Twickenham? In this superb stadium tour experience you can choose the time, the stadium and the tour to suit you, whether it’s wandering around Wembley or going backstage at Stamford Bridge.

Experience the traditions, trials and triumphs of sporting legends who have won and lost at these legendary grounds, before calling time on an unforgettable day that will stay with you long after the final whistle.

Treat yourself or someone special (and sports mad) to a memorable stadium tour. Take your pick from a huge range of different sporting venues, ranging from Arsenal’s Emirates Stadium, Anfield in Liverpool or Old Trafford in Manchester, to Twickenham – the home of English rugby – and the world famous Wembley Stadium.

The tours will vary from one venue to another but may include a walk down the players’ tunnel, seeing the first team dressing room and walking onto the pitch itself. For instance, at Old Trafford guests will typically have the chance to sit in the towering North Stand, stand in Sir Alex Ferguson’s dug out spot, visit the Home changing room and walk through the players’ tunnel. At Twickenham, the tour typically includes a visit to the England team dressing room, the Royal Box, the players’ tunnel and the famous World Rugby Museum – home to a vast collection of rugby memorabilia.

Know someone who’s stir crazy over cricket? A footie freak? Goes gaga at goals? Win them over and score huge brownie points by treating them to a special tour of their favourite stadium. Send them behind the scenes in this legendary encounter in which they’ll get to taste the highs and lows of sporting stars throughout history. From Wembley to Wimbledon, Twickenham to Old Trafford, savour the chance to see the trophies, step onto the turf and dip into the dressing rooms in this access all areas experience. It’s the perfect gift for sports nuts of all ages and from all walks of life.

There's a wealth of choice when it comes to stadium tours. Here's some quick choices for the most popular tours. If you search through this long list, you'll find options for solo tours, tours for an adult and child, and family tours.

Everyone has a favourite team and a favourite stadium. But that means buying an experience can be tricky - you don't want to give a die-hard Arsenal fan a Manchester United stadium tour. If in doubt, opt for a general tour package.

Can't remember what their favourite team is? Panic not. Opt for the stadium tour voucher which lets them choose which stadium they'd like to tour. You look cool for buying a tour rather than looking a fool for buying them a tour for a rival team. The Fun Together Smartbox by Buyagift lets them choose from over 930 couples experiences including stadium tours.
From £39.99 for two from Buyagift (at time of writing)Learn more°

Already toured the stadium or want a different perspective on things? Try a helicopter tour. Several specialise in flying above famous stadiums around the country.

Choose from one of 18 different stadium helicopter tours departing from a dozen locations nationwide. See the stadiums of the top Premier League teams from above, including Manchester United's Old Trafford and Liverpool's Anfield Stadium.
From £199 per person from Activity Superstore (at time of writing)Learn more

Get a behind-the-scenes look of the Emirates stadium. See the players’ tunnel, the first team dressing room, the Director’s box, and the press conference facilities. Afterwards, visit the interactive Arsenal Museum.
From £20 per person from Buyagift (at time of writing)Learn more°

Perfect for a mother and daughter or father and son day out, head to Stamford Bridge for a peek behind the curtain at Chelsea Football Club's stadium. Learn about the club's history, see the dug-out, tour the changing room, and walk down the players’ tunnel.
From £32 for one adult and one child from Activity Superstore (at time of writing)Learn more

Learn about Fulham FC's history with a guided tour of Craven Cottage. See the dressing rooms, the players’ lounge, tunnel, and enjoy the view from the Cottage Pavilion.
From £38 for two adults and two children from Virgin Experience Days (at time of writing)Learn more

What do you get a die-hard Liverpool FC fan? The Ultimate Anfield Tour Experience, of course! This is not your run-of-the-mill stadium tour. Meet a club Legend for a detailed team talk and tactical discussion over a footballer-style breakfast before stepping aboard the official team coach for a trip to the LFC Academy. LFC Soccer Coaches will kick-off a football masterclass putting you through your paces. Next it's a four-course meal in the VIP Executive Lounge, before heading on a tour of Anfield. Leave with autographs and souvenir photos, as well as an exclusive gift and fantastic keepsakes from the day.
From £275 per person from Buyagift (at time of writing)Learn more°

Begin at the MCC Museum, from where your guide will show you around the grounds. You'll see he players changing rooms, the Long Room, and the Lord's Board of Honours.
From £36 for two from Experience Mad (at time of writing)Learn more

Look at the press conference area, warm up zone, home changing room, players' tunnel, and stand pitch-side or a seat in the manager's dugout at Manchester City's Ethiad Stadium. Afterwards, explore the club's history and future plans with a self-guided tour.
From £40 for two from Red Letter Days (at time of writing)Learn more°

Tour what is arguably one of the most famous football stadiums in the country, if not the world. Your guide is a former Manchester United player, such as Alex Stepney, Lee Martin, Sammy Mcllroy, or Norman Whiteside, who will show you the changing room, the players tunnel, and the dugout. Your guide will share plenty of personal anecdotes along the way. A buffet lunch is provided as is an extended Q&A session with many photo opportunities. Finish in the Manchester United Museum.
From £119 per person from Activity Superstore (at time of writing)Learn more

Start on Millwall's iconic blue and white Routemaster bus for an introduction and a fascinating account of the club's history. Continue to tour the directors' box, the players' tunnel, the home team's dressing room, the dug outs and pitch-side.
From £12 per person from Virgin Experience Days (at time of writing)Learn more

Go behind the scenes at St James' Park, discovering inside secrets, mysteries, and history along the way. Afterwards, head to the private box for a three course meal.
From £149.99 for two from Buyagift (at time of writing)Learn more°

Get plenty of insider information as you walk through the players' tunnel, visit the underground roadway, see the changing rooms, and the warm-up areas. You'll have the chance to measure your kicking speed in the Hotshots gallery.
From £24 for two from Gift Ideas For Two (at time of writing)Learn more

Go behind the scenes at the home of British motor racing, Silverstone. Go into Race Control, see the Pits, run down the racetrack, and even stand on the podium yourself.
From £30 per person from Buyagift (at time of writing)Learn more°

Tour the home of English rugby and walk pitch-side around the famous turf. Visit the Royal Box, medical room, and hospitality suites. Then, visit the World Rugby Museum full of rugby memorabilia, paintings, archive match footage, and the Wall of Fame.
From £40 for two from Virgin Experience Days (at time of writing)Learn more

Tour one of the most famous venues in football, Wembley Stadium. Take the manager's hot seat in the press room and see the England dressing room. Emerge from the players' tunnel and climb the 107 steps to the Royal Box.
From £23 per person from Red Letter Days (at time of writing)Learn more°

The former stadium for the London 2012 Olympic Games has now transformed into a multi-use venue and is the home to both West Ham United and UK Athletics. See the changing rooms, the hospitality restaurant, indoor running track, players' tunnel, pitch-side and the mangers' dug outs. It's a perfect option for West Ham fans as well as those that missed out attending the Olympic Stadium in 2012.
From £48 per family at Red Letter Days (at time of writing)Learn more°

Take the Ultimate Wimbledon Tour and head to off-limits areas including Number 1 court, the landscaped water gardens, and the press interview room.
From £155 for two from Gift Ideas For Two (at time of writing)Learn more

Goooaaaaaaal! - What You Need To Know