For some muddy good fun, look no further than digger racing. Some bright spark looked at these 8-tonne monster machines and thought "hey, they'd be great to race" - and they were right!

This is a downright quirky experience and it delivers fun in bucketfuls. If you want something different to bog standard supercar racing experiences, this is it.

What is JCB Digger Racing?

Fancy a dirty weekend? Ready to feel the earth move? No, I'm not talking about a visit to Amsterdam's red light district but instead JCB Digger Racing.

Let's be honest, everyone and their dog has whipped a sports car around a track. Now's your chance to do something your mates haven't.

JCB Digger Racing is all about getting down and dirty with extreme thrills and earth-shaking shenanigans. These 8-tonne rubber ducks are real construction machines and they don't take any prisoners.

Hop behind the wheel of a JCB monster and blast around an obstacle course, grabbing cones and scooting around corners. You'll tear up the track and see the dirt fly in this hilarious rough 'n ready day out, which is all about oversized fun and bucket-loads of tomfoolery.

The aim of the game is to get first past the chequered flag and be crowned Digger Racing Champion. But it's not quite that simple. Once you've had the safety briefing and you've been shown the ropes by an experienced digger driver, you'll be split into groups of 3 or 4. This hapless lot will be your first adversary so now's your chance to size 'em up.

Armed only with a hard hat you'll be let loose in the driver's seat of a JCB 3CX backhoe loader worth over £50k. Your newfound skills will be put to the test with precise bucket work before you push that pedal to the floor and let all 100 horses out of the tank. The maximum speed of 23 mph might not sound fast, but combine this with deep potholes on a muddy off-road dirt track and you'll be thankful for the hard hat.

Do massive yellow diggers scare you? Try dumper truck racing first as these pint-sized diggers are equally as fun, and you'll get to exercise your competitive spirit. If you'd like a go in a JCB 3CX but would prefer an experience where you can get to grips with the controls digging and backfilling, try this digger driving experience instead.

Don't be fooled into thinking you can blast off and rip round the track before the others have even released the handbrake – speed is important, but so is control and agility. During each heat you'll be given tasks including picking an item up in your bucket, holding it, and dropping it in a given spot further along the course.

This is the racing experience that’s all about extremes. Extreme machines, extreme power, and extreme yellow. JCB is a world-famous brand and their top of the range excavators can be seen here, there, and everywhere, shovelling tons of earth and making demolition look like child's play. So given the chance to get behind the wheel, anyone worth their salt would be up for this challenge.

Can you dig it? - What You Need To Know

As a kid I wanted to be a cement truck driver (note to self: way to go achieving your childhood dreams). Despite my hapless DIY skills, diggers and construction have always fascinated me, so there's a natural appeal here. As someone who's tried - and failed- to blag a JCB factory tour, I am seriously geeky about diggers.

Some get their kicks from lapping a supercar round a track at blistering speed, but I love me a challenge. Digger racing takes skill, tactics, and bravery to master, as I found out when I tried this experience.

I rocked up at Diggerland Kent with my Dad and Grandfather in tow for a 10.30am start. The day started with a very quick safety brief with the overall message being have a good time and be competitive but not too competitive. We were shown the course before splitting down into three groups, each then huddled around an instructor inside the cab who showed us the main controls. All we needed to worry about were the accelerator and brake pedals, the steering wheel, and the lever to control the front bucket. 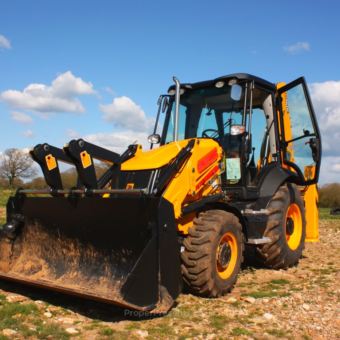 A trio of new JCB diggers lined up on the track. The JCB 3CX Contractor has a 4 cylinder, 4.4 litre, 100 horsepower (74.5kW) diesel engine. This massive machine weighs just over 8 tonnes but was surprisingly nimble thanks to the power steering. Small turns of the steering wheel translated to fast and responsive changes to the front wheels, aiding manoeuvrability. Its turning circle is as little as 6.9 metres! The cab offers stunning clarity of vision in all directions, which I suppose is quite handy on building sites. The JCB 3CX used the JCB Powershift transmission, which made gear changes very simple indeed – a twist of a stalk on the left hand side of the steering wheel changed the gears up or down.

Split into groups of three, each group raced and then watched the others before having another go. The highest scoring participants then raced in a final heat to decide an overall winner. My grandfather, father, and I were grouped together in a heat. We had scoped up the competition (a real mixture of ages and a 70/30 split of men to women) and decided we probably had no chance of being crowned as digger racing champions. Nevertheless, we weren’t there for the overall title, we were there for family pride and bragging rights!

We started our engines and the race was on. Our first task was racing through a set of narrow poles to a tyre where we needed to perform a 180 degree turn. The next task was picking up a cone with the front bucket. This sounds easy but you’re grabbing something you cannot see, due to the size of the tiny cone in relation to a massive bucket (with a capacity of one cubic metre).

The next part was a tight slalom around a set of tyres before a long straight run where we discovered what digger racing is all about. The top speed may only be around 20mph but on a dirt track that is bone-shaking speed. My hard hat took the impact as I hit the cab roof several times whilst bolting down the straight! The track was littered with deep pot holes but these were no match for the JCB which simply bounced along over them.

The straight lengths of track could be raced in second and third gear and were a great place to cunningly overtake if you have been stuck behind a slow competitor. Whilst I closed the gap on Dad I didn’t manage to get close enough to overtake.

The frantic race ends by lining up at the start and dropping the cone.

As numbers were low on the day, we benefited from a bonus third lap. At the end of the three laps the points were tallied and it turned out that we were no-where near the top of the overall leader board. In our little race, Dad was triumphant (and claimed the bragging rights - boo!), I came second and Granddad came third.

The experience drew to a close with a head-to-head between the highest scoring. The line-up consisted on those with guts, courage and a hugely competitive streak. This closely fought battle was neck-and-neck all the way along and was awesome to watch. They were definitely the best of the group as they stuck together like glue, battling their way for first place.

Whilst the scores were added up we were treated to a couple of moves from a Digger Dancing troupe team member. He showed us exactly the kind of gradients the JCB 3CX could be safely subjected to. Whilst racing in the cab we felt that we were pushing the boundaries of machine tolerance but this display confirmed we were nowhere near them!

Overall, this experience was way more fun than I ever could have imagined. Each of us left proud and triumphant, safe in the knowledge that we had participated in a competitive motor sport still in its infancy. If you love diggers, you’ll love this. None of us three had ever stepped inside a digger before yet we came away with knowledge and a great experience that we’ll remember for life.

This experience is unique, fun-filled, and adrenaline-inducing. I would all definitely do this again in a heartbeat.

You can book a digger racing experience through Red Letter Days and have just as much fun as I did. There's several locations to choose from, and events run on selected weekends throughout the year.
From £129 per person (at time of writing)Learn more°

Zany is perhaps the best word to describe the Digger Racing experience day. Events are held on limited dates on the year in select Diggerland parks, but if you can get there, this is such a blast. Brace yourself for bone-juddering off-road racing in machines built for digging.

Disclosure: Red Letter Days supplied two free tickets for Digger Racing at Diggerland in Kent, and I bought a third ticket. I paid for my transport to and from the event. My opinions are my own.