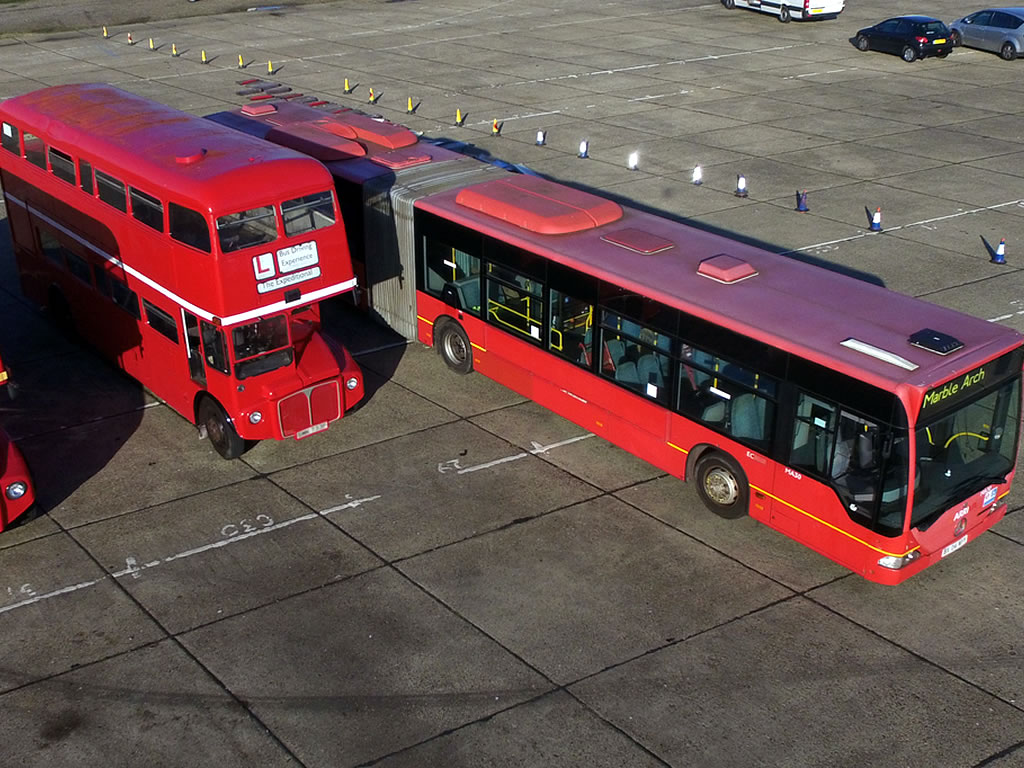 Get on the buses with this awesome experience featuring an iconic London Routemaster bus and a controversial bendy bus.

It’s just the ticket for anyone who loves mega motors and also makes a ‘fare’ present for regular bus users – so why not put your friend or partner in the driving seat for a change? Watch them grapple with gears and speed through slaloms as they attempt to master this burly beast and complete numerous off-road challenges. They’ll soon have new-found sympathy for bus drivers everywhere. This is massive machine driving at its rumbling best and a fully charged experience for big kids who love big toys.

Forget all that hard work getting your Public Service Vehicle (PSV) licence. Just jump in the cab and you'll be a pro in no time at all.

The buses have automatic transmissions and power steering, so other than the flat, massive steering wheels, it's much like driving a car. Only bigger. Way bigger.

Think of London and you'll instantly picture red double-decker buses. While the New Routemaster (nicknamed the Boris Bus) with its fancy hybrid diesel-electric engine is all the rage, it wasn't so long ago the AEC Routemaster was the gold standard. The buses became so synonymous with London, they're still used for weddings and special events, and you'll find plenty of toy Routemaster buses in the souvenir shops.

In 1954, the design of the rear open platform and the half-width cab made this bus a true icon. These workhorses regularly trundled along London's busy streets from February 1956 to December 2005. Since then, they have become a endangered species.

Now is your chance to drive this classic double-decker red London bus. You'll start with a short briefing covering safety. You'll learn the controls and the driving techniques. Then it's all aboard for a drive as you literally climb into the raised cab. You'll negotiate junctions and corners, stop at a bus stop to pick up your virtual passengers, and try your hand at the bus equivalent of a slalom.

Enjoy a half-hour experience driving a classic AEC Routemaster. Transport yourself back the the 60's, 70's, 80's, and 90's and relive the golden age of bus travel in London.
From £219 per person from Into The Blue (at time of writing)Learn more°

Bendy buses - or articulated buses if we're being posh - cluttered London's streets from October 2001. As the old Routemasters didn't conform to the Disability Discrimination Act, these shiny bendy buses were seen as the modern day solution. They were a familiar sight elsewhere around the world but relatively new in the UK.

But they didn't go down too well. While they removed steps altogether compared to a double-decker, they took up twice as much road space. And in London, road space is at a premium. Their unwieldy length meant they became a nuisance to other drivers, cyclists, and pedestrians, particularly at junctions.

By December 2011, they had all disappeared from London's streets. Some headed elsewhere in the country, including to Leicester, Liverpool, Brighton, Bristol, and Glasgow. Some were even exported to Malta!

One was snapped up and now the 18 metre-long red monster is available for you to drive in a fun and quirky experience. Compare the classic Routemaster with the modern-day bendy bus to see which is best. Will you prefer the marvel of British engineering or will you prefer the snake-like alternative that sought to replace it?

Spend 10 minutes driving a Bendy Bus and have 20 minutes behind the wheel of a classic Routemaster.
From £239 per person from Into The Blue (at time of writing)Learn more°

Want more time in the Routemaster? Spend 10 minutes driving a Bendy Bus and have half an hour driving the classic Routemaster.
From £269 per person from Into The Blue (at time of writing)Learn more°

Tickets, Please! - What You Need To Know

(Photo credit to Into The Blue / Expeditional)